Quite some time ago, I vowed to write about play. Play as antidote to fear. Play as means of coping, even thriving in a quickly changing world.

After I wrote this an event happened that stalled my writing, halted my sure and steady movement through my well planned days,

and once again brought uncertainty into the picture.

My step-mother died very suddenly of a brain aneurysm.

In a moment everything changed.

I remember a teacher colleague once saying, many years ago, that it is not usually the anticipated events that rock our worlds, rather it is that unexpected phone call on a Monday afternoon.

The day it happened ~

I had just had coffee and a slice of chocolate cake with a dear friend, a great inspiring visit actually full of good laughs and exciting future plans, and then as I  left the cafe and  walked towards my vehicle I checked my phone.

When I called him back he said right away,

‘Where are you? I don’t want to tell you over the phone what I need to tell you. I want to come and talk to you in person’.

My heart pounding,  ‘No, tell me now. Please just say it.’

In our most secret unspeakable depths, we all prepare for those calls, don’t we?

That Monday afternoon call that will force us to put everything we thought was important on hold for weeks perhaps, and then re-calibrate our entire perceptions of the world, our very place in it.

After we hung up I cried out openly, there on the street, in agony for my dad and for this new loss that he was forced to bear. I stood there tears streaming, waiting for Dan, and looking everywhere for my friend who had already gotten in his truck, already gone.

Wanting to call my friend back so that he could reassure me that things would be ok.

Wanting somebody, anybody, to tell me that we would get through this one.

On that street corner all by myself waiting for Dan who was coming because he was worried for me, I realized that every maternal figure I have ever had is gone ~my mentor, my grandmothers, my step-mother now,

It is just me.

Even my friend had gotten in his truck and driven away.

after the hospital and the funeral and the tears and the big conversations and the grief and the family everywhere and all the missed school and work and the beginning of finding a way forward for my dad, 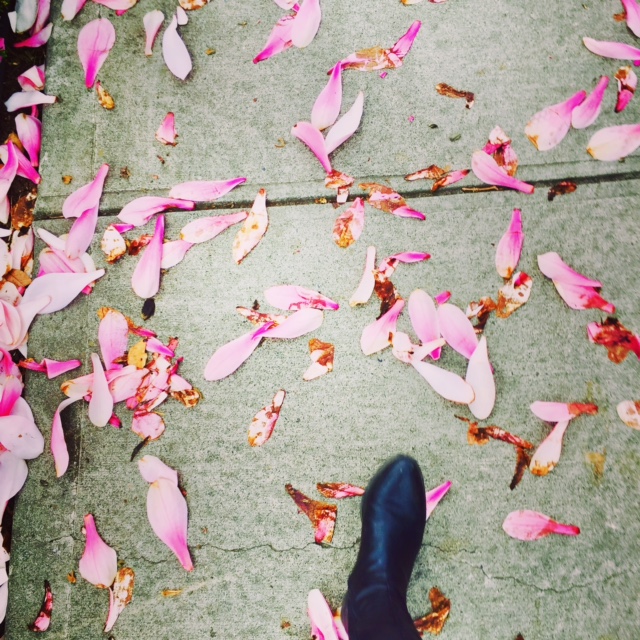 we went whale watching in Victoria.

We had gathered there as a family over the break and we spontaneously booked a tour on our first morning. We had always promised George we would go on a whale adventure, but then had always found reasons not to.  That day,  however,  the weather seemed particularly good, we had nothing else planned, and I can tell you honestly that I knew, absolutely knew, that we would see whales that day if we went.

We had to go out fairly far, but it ended up being what they call a T-party of whales. Whales in every direction. Not even knowing which way to look because as one would surface, there would suddenly be another sighting on the other side of the boat.

Families of whales. Young whales pressed against their mother as they swam. An independent male on his own  surfacing then going under as we all watched with anticipation, wondering where he would pop up next. 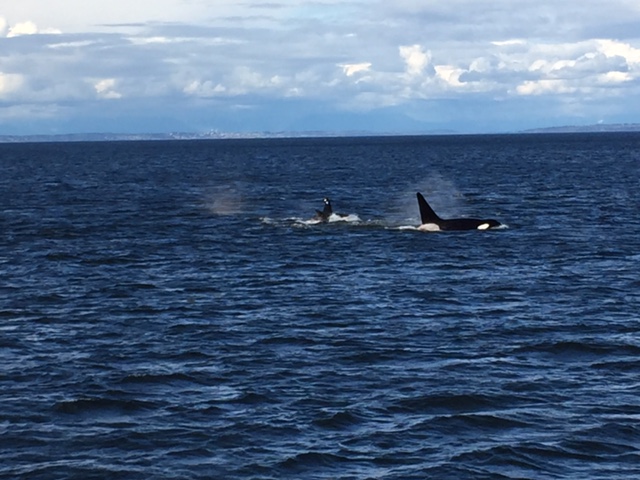 All around us, a whole pod, a matrilineal community of interrelated magnificent communicating, beautiful orcas.

Orcas that have visited me in my dreams since I was a child. Magical dreams where I watch them, down from a cliff at night or my face pressed up against the glass of a huge aquarium,

half of me afraid of their power and strength while the other half is delighted, transfixed, comforted and healed.

A show that day that just went on and on. Our kind tour guides were willing to stay on past the allotted time because the day was perfect and the whales just weren’t leaving.

And then finally not being able to linger any longer, we reluctantly turned back towards the mainland.

The orcas swam back with us in the same direction, stealth-like and fast, underwater, towards a cropping of rocks covered in lounging elephant seals. 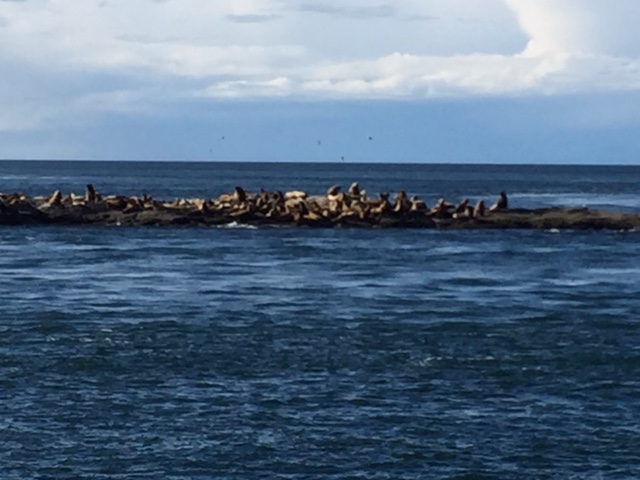 Our captain stopped the boat for us to watch the hunt unfold; the orcas surfaced at the rocks and surprised their prey who were by no means helpless, fighting back with vigor. It was over quickly, and the whales were again moving on, having been rewarded with one unlucky seal.

A nature documentary in real time.

Continuing on, bathed in glowing late afternoon sunshine, the whales headed towards the shore and swam right up against a cliff nestled on top of which was a park where families often recreate. From the boat we watched as children ran along the cliff following the orcas, screeching with delight.

I truly don’t know if I have ever had the pleasure of witnessing such a perfect moment of spontaneous play, natural and true, uncomplicated and wild.

It is never just me. It is Dan and I, the kids and I, us. It is this beautiful extended family that I love so much that were gathered for Easter fun. It is my dad and I. My friends.       My wonderful neighbours. It is new acquaintances and the grocery store cashier that I exchange friendly words with ~

It is all those I have lost, living in me with every heartbeat.

navigating the heartache and the uncertainty yet still forging creative ways to joyfully be in this brave and beautiful new world. 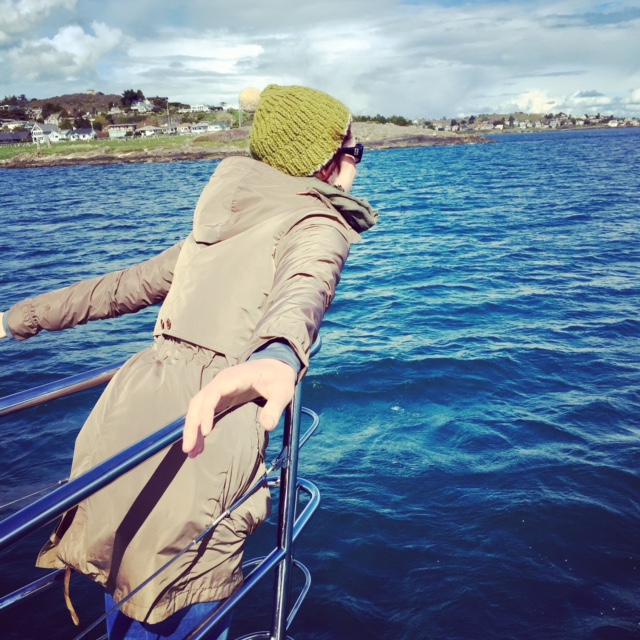 And it is whales, meeting me at sunset after a lifetime of knowing each other in dreams. The promise is the same. It’s going to be ok.